Somewhere Over the Rainbow Ukulele Chords 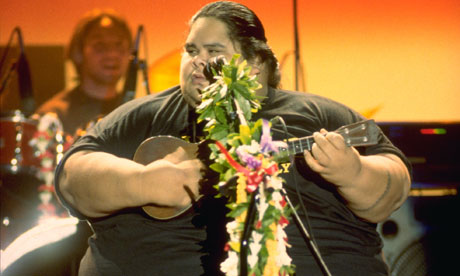 One of the most popular searches for ukulele is for Somewhere Over the Rainbow chords, as played by Israel Iz Kamakawiwoʻole, the well known Hawaiian ukulele artist who passed away sadly in 1997. His version of Somewhere Over the Rainbow is actually part of a medley he is famous for that combines the original Wizard of Oz song “Over the Rainbow” by  Harold Arlen and lyrics by E.Y. Harburg, with another classic song “What a Wonderful World” by Bob Thiele (as “George Douglas”) and George David Weiss that was popularized by the Louis Armstrong recording released in 1967. 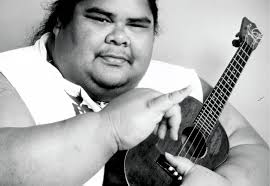 The Music Theory of Somewhere Over The Rainbow

Israel combined the two songs together using similar chords that are common on the ukulele and easy to play, such as C, F, A-. However, it is a reharmonization of the original songs and has a new arrangement, plus some lyric rewriting. Everyone loves his version as it has garnered over 300,000,000 combined views on YouTube. In fact, popular culture has perhaps replaced the original versions of these songs with Iz’s reimagined one since it has been heard in movies, television, commercials and more over the past 20 years.

Israel’s version was first released in 1990 as the medley with both songs on his album Ka ʻAnoʻi. It was a live recording made in 1988 in one take, spur of the moment. The blending of the two classic songs together with Iz’s fabulous voice creates a touching sense of optimism and looking forward in life. Perhaps this is why so many want to know how to play Somewhere Over the Rainbow on uke.

In the Wizard of Oz movie recording, sung by Judy Garland, the original key is Ab and the chord structure has a more complex, jazz harmony to it. Israel transposes this into the ukulele friendly key of C and takes license with the melody to fit his mood and sentiment, as is typical of his easy going island style. The original key of What A Wonderful World is F. Iz transposes it into C for the uke and uses much of the same harmony as for Over the Rainbow. It could be considered an improvisation, since it was a single take, an off the cuff recording made only for the artist and his recording engineer, Milan Bertosa.

In the full, original recording, Iz starts with the Over the Rainbow lyrics and gently morphs into What a Wonderful World, returning to the Rainbow once more, and ending with some of the sweetest “Oooos” ever recorded, where music is at its best, both pulling at the heartstrings with sadness while at the same time bringing a smile and sense of hope for the future.

For the complete video lesson and chord chart for “Somewhere Over the Rainbow” on uke, click here. Only $0.99!  For What a Wonderful World click here.